Could Vitamin D Actually PREVENT Hashimoto’s, Diabetes, and Even Cancer? And If So, How Much Do You Need?

Could Vitamin D Actually PREVENT Hashimoto’s, Diabetes, and Even Cancer? And If So, How Much Do You Need? 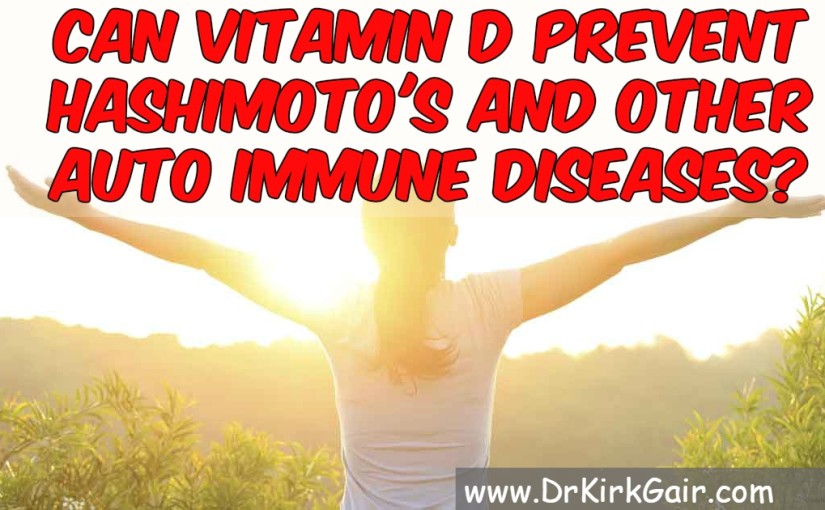 Ah, Vitamin D…the “sunshine vitamin”. When most of us hear about it, we usually just associate it with healthy bones…but it is actually so much more than that.

Many people have the mistaken idea that “all you have to do is get a little sun and you will have enough.” This simply is not the case, as I routinely find severe deficiencies even in kids and people who are outside all day playing sports or working.

I got curious to see if there was any research that showed not just that vitamin D was good for those who already have auto immune diseases like Hashimoto’s and Diabetes, but if any studies showed it could help prevent your kids from developing the same disease. What I discovered in the research studies is very promising!

So what else does Vitamin D do besides make healthy bones?

It is involved with the regulation of over 900 genes, influences and modulates the immune system, modulates inflammation, has a role in fighting preventing cancer, and even plays a role in brain function and diseases like dementia and Alzheimer’s.

Vitamin D deficiencies are also associated with other conditions besides just Rickets and Osteoporosis, such as PCOS, Lupus, Diabetes, Celiac, and inflammatory bowel diseases.

Grain Brain author, Dr David Perlmutter, thinks optimal vitamin D levels are so important that has made a video that explains why he tests ALL his patients… http://www.drperlmutter.com/delightful-vitamin-d/

What Does The Research Say About The Link Between Low Levels and Auto Immune Disease?

When searching through peer reviewed articles on this topic, I found several promising studies.

In the May 2013 edition of the journal Endocrine Practice, they found the following:

“We demonstrated that serum 25OHD (vitamin D3) levels of HT (Hashimoto’s Thyroiditis) patients were significantly lower than controls, and 25OHD deficiency severity correlated with duration of HT, thyroid volume, and antibody levels. These findings may suggest a potential role of 25OHD in development of HT and/or its progression to hypothyroidism.”   http://www.ncbi.nlm.nih.gov/pubmed/23337162

Several other studies found the same thing. One study in the 2015 edition of Scientific World Journal found that “lower serum D levels were associated with higher thyroid antibody levels.”   http://www.ncbi.nlm.nih.gov/pubmed/25654127

In the May 2014 Journal of Endocrinological Investigation found that higher levels of Vitamin D on blood tests could actually reduce the risk of Hashimoto’s.

“Our study suggested that higher serum 25OHD levels was associated with decreased risk of HT  (Hashimoto’s Thyroiditis) so that each 5 ng/ml increase in the serum 25OHD levels results in 19 % decrease in odds of HT.”  http://www.ncbi.nlm.nih.gov/pubmed/24639121

This is huge. So if you raised your D level from a mild deficiency of 25 ng/ml to the recommended 50 ng/ml, you would decrease your odds by 115%. Pretty powerful for such an inexpensive supplement.

And the Dec 2012 journal AutoImmune Review found “Basic, genetic, and epidemiological studies indicate a potential role of vitamin D in the prevention of autoimmune diseases.”   http://www.ncbi.nlm.nih.gov/pubmed/22776787

There were many more articles that had similar conclusions for not just Hashimoto’s but also other auto immune diseases ranging from Diabetes to Lupus to Rheumatoid Arthritis.

And this study from the British Journal of Dermatology in Aug 2002 even showed a protective benefit from cancer, as vitamin D was shown to help with the “inhibition of tumour invasion and metastasis potential” and that it has “an inhibitory effect on the spread of MM (malignant melanoma) cells.”  http://www.ncbi.nlm.nih.gov/pubmed/12174089

So What Level Is Optimal, and How Much Is Safe And Necessary to Take to Get There?

When looking at all these studies, in general the minimum level seemed to be 50 ng/ml. Compare that to the fact that most patients are being told their levels are “fine” if they are in the 30 ng/ml range.

Other studies suggested that the target range should be 60-80 ng/ml for auto immune and cardiac patients, and between 80-100 ng/ml for cancer patients.

The Feb 2001 edition of the American Journal of Clinical Nutrition found that doses of 4000 IU (100 mcg) per day were safe. The Mayo Clinic has various ranges depending on the condition, and some doses are much higher than those in this study.

My recommendation is to find a good functional medicine practitioner and get your D3 level tested instead of just going off a chart for a condition. This way you and your provider can work at getting the right dosage for you to get into your optimal range.

When I have patients who are deficient in my office, we will usually start them off with a daily dose of sublingual D3 with cofactors and will test them each 1 to 2 months until we hit the target range.

Some patients may need only 4000 to 6000 IU per day, while others need it much higher. This is why blood testing is crucial, especially follow up testing. I have seen patients come in who had been on supplements for years who were still deficient.

So What Do I Do If I Am One Of Those Patients Who Remains Deficient Despite Supplementing?

First thing I would do is to look at which type of vitamin D you are taking. D2 has been shown to be ineffective at raising blood levels, yet that is the form I regularly see doctors prescribing. In fact, large HMOs still do this despite the evidence that it is ineffective. Studies show D3 to be more effective.

Second, if you have gut issues, such as Celiac disease, gluten sensitivity, Crohn’s disease, ulcerative colitis, or had gastric bypass surgery, it will be more difficult for you to absorb D3. This is why I utilize the sublingual forms with my patients. You may also require a form that has co-factors in it such as vitamin K for better utilization.  Still others may have genetic issues that affect absorption.

Third, work with your doctor on gradually increasing your dose safely until you can get the level to increase. Once you get to your target level, then you will work on your daily level to maintain it at optimal. I would recommend testing the level at least twice per year.

I hope you found this article helpful. You can follow me at www.Facebook.com/ThyroidInfo, www.Facebook.com/LaserChiropractic, or @drkirkgair. You can also join my mailing list to get my latest blog posts sent to you free.

And remember to discuss all these issues with your healthcare provider before starting a supplementation protocol.

How To Boost Sports Performance & Prevent Injuries, Especially In Today’s World of Year Round Sports