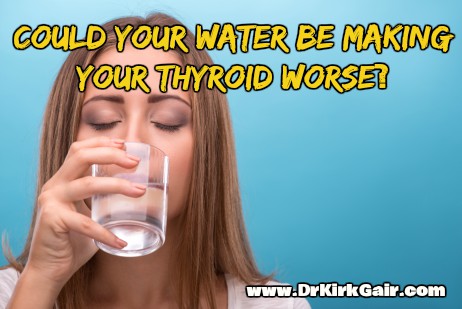 As if there was not enough to worry about, there always seems like there is one more layer to go deeper, right?

Not all water is problematic, but a study published in the 2014 edition of the Scientific World Journal found that a common additive to water has been linked to Hypothyroidism, Cognitive Impairment, Enzyme disruption, Arthritis and bone degeneration, and even cancer.

So just what is this ingredient? Well, it is one that most of us have been told is really good for us and essential for public health…Fluoride.

For a great detail of the pros and cons of its addition to the water supply, I highly recommend that you check out the full text of the study and its references to other studies. You can click HERE to view it on PubMed.org.

While there have been studies that show that topical application of fluoride can have some benefits in cavity prevention, many studies show that ingestion of it has some serious adverse effects on many systems in the body.

This particular study concluded that the “mechanisms through which fluoride exacerbates hypothyroidism include competitive binding with iodine, as well as synthesis obstruction of T3 and T4.“

And how many of you out there with Hashimoto’s have problems with low T3? (that is, if you can even get your doctor to order that test…)

So when we look at that statement, it is pretty powerful. Many patients are already low in iodine, which impairs thyroid function. However, paradoxically they cannot supplement with it because it can increase antibody activity and increase the rate of destruction of thyroid cells (click here to see Dr Kharrazian’s article for his take on the iodine controversy), and now fluoridated water can make their iodine problem even worse.

Also, many patients have trouble converting T4 to T3, and again fluoride complicates it even further.

Of important note is a study from April 2016 in the journal Biological Trace Elements Research, which found that the greatest damage to thyroid follicular epithelial cells occurred when the patient was exposed to both iodide and fluoride.

Furthermore, they found that “iodine-deficient children ingesting fluoridated water have been found to demonstrate intellectual deficits even at water fluoride levels of 0.9 ppm”.

The study also found that fluoride can also impair the absorption of calcium and magnesium as well, while also disrupting the activity of key enzymes, like cytochrome P450, which is important for numerous biological processes, such as oxygen binding, photosynthesis, respiration, and detoxification.

When your body’s detoxification pathways are hindered, this can also have a negative impact on thyroid function,

When it comes down to children and fluoride in the water, there is some very worrisome data on Chinese populations. A 2012 study in the journal Environmental Health Perspectives found that “Children who lived in areas with high fluoride exposure had lower IQ scores than those who lived in low-exposure or control areas.”

So What Increases Our Risk of High Exposure to Fluoride?

The studies I referenced here recommend that you look at ALL sources of fluoride to get an idea of your combined total exposure. First, you can contact your local water agency to find out what the fluoride level is in your local water. You can install home filtration units to remove the fluoride from the water to minimize your exposure. The CDC states that in areas where fluoride is added to the water it averages 0.7 ppm, though other sources say it can be higher than that.

My favorite thing, drinking TEA, can increase your intake of fluoride and risks for overexposure. Boiling water can double the concentration of fluoride in the water, and many teas have high levels, which varies by brand and type. Cereals and some condiments also contain it.

Then there are the fluoridated mouthwashes and toothpastes. You have to add all these up to get an idea of your exposure. The studies I cited stated that you can get a great reduction in cavities by dietary changes, such as eliminated processed carbs and sugars, and by having good overall nutritional health and hygeine.

Again, I highly recommend that you read for yourself the studies I cited here and come to your own conclusions about what is best for you and your family.

Is the Blood Type Diet “RIGHT” for You?