Is Giving UP Gluten REALLY Necessary for Hashimoto’s Patients, or Just Fad Hype?

Is Giving UP Gluten REALLY Necessary for Hashimoto’s Patients, or Just Fad Hype? 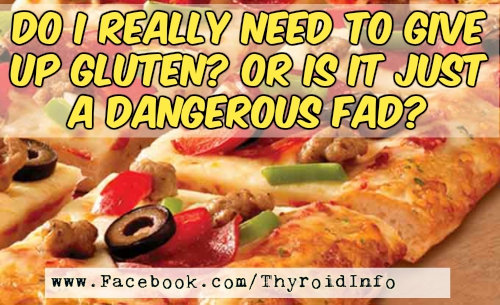 Unless you are newly diagnosed, chances are you have heard a lot about the connection between eating gluten (a protein found in wheat, barley, rye, oats) and auto immune diseases like Hashimoto’s.

You also have probably heard from your doctor, online nutritionists, and many mainstream media outlets and late night talk show hosts saying it is a lot of BS, and that you actually NEED gluten to be healthy.

So Who Is Right?

And also, just how strict do I really need to be? Can’t I have a little cheat? What if I don’t have any gut symptoms?

To find out the answer, I searched through research articles on PubMed. I already knew my stance on the issue, but wanted to make sure there was current research that supported it.

In the March 2015 journal Cerebellum, gluten was further linked to neurological disorders such as gluten ataxia, where there were no gut symptoms whatsoever, and occurred most commonly in patients with Hashimoto’s and other auto immune diseases. Check out this quote from the study:

“As with celiac disease, patients with GA (gluten ataxia) are often found to have an increased prevalence of additional autoimmune diseases the commonest of which include hypothyroidism, type 1 diabetes mellitus and pernicious anemia. Gastrointestinal symptoms are seldom prominent and are not a reliable indicator for the presence or absence of enteropathy. In this respect, gluten ataxia resembles dermatitis herpetiformis, an autoimmune dermatopathy triggered by gluten where gastrointestinal symptoms are not prominent even in the presence of an enteropathy.” (parenthesis and bold added by me for emphasis and clarification)

Wow. That is pretty powerful. How many of you with brain symptoms has ever had your doctor consider a possible gluten connection?

Did you know that a study from 3 years ago showed an increased need for T4 in patients with atypical Celiac disease?

How about that the need for increased T4 dosage reversed when the patient adopted a gluten free diet?

This study was in the March 2012 journal of Clinical Endocrinology and Metabolism. Have you ever had your endocrinologist consider that this may be another reason your T4 is not working as it should, or did they ridicule you when you asked about it?

As far back as 1999, the Italian Journal of Gastroenterology and Hepatology   concluded the following:

I could go on and on with studies that show the connection between gluten reactions, both non-celiac and celiac, and auto immune diseases, but it would quickly turn into a book.

The 2013 study in the journal Brain and Nerve by Yoneda even showed connections between Hashimoto’s encephalitis and gluten ataxia, which caused not only thyroid symptoms but neurological symptoms.  Thus gluten intake actually triggered not only reactions in the thyroid but also the brain.

Ok, so there IS a connection, but can’t I have an occasional cheat?

I remember talking to my friend Dr Datis Kharrazian about this. My wife had gotten seriously ill from her thyroid and mine was wreaking havoc on my life as well.

It wasn’t what I wanted to hear, but it was what I needed to hear. He then told me something that the immunologists at Cyrex Labs confirmed when I had a consultation with one of their top doctors.

Just ONE exposure to gluten, one little bite of a “cheat”, could trigger an immune flare up that lasts 6 months to one year.

I highly recommend that you go onto www.PubMed.org and search for yourself. The number of research studies is mind boggling.

Also check out www.CyrexLabs.com to read about the cutting edge tests that they are running for food reactions, environmental toxins, chemicals, metals, etc.

I hope this gives you some helpful info, and be sure to talk this over with your functional medicine or functional neurology practitioner for customized help.

Should Hashimoto’s Patients Get Flu Shots, Or Will It Make You Worse?

Is the Blood Type Diet “RIGHT” for You?